The NICHD convenes a coalition to discuss a national public education campaign to raise awareness about SIDS and SIDS risk reduction. The coalition includes the NICHD; the Public Health Service (PHS); the AAP Task Force; the Association of SIDS and Infant Mortality Programs (ASIP); the National Heart, Lung, and Blood Institute (NHLBI); and the SIDS Alliance (now First Candle).

U.S. Surgeon General Joycelyn Elders, M.D., issues a policy statement that "healthy infants be placed on their back or side to sleep to reduce the risk of SIDS."

The NICHD launches the Back to Sleep campaign. Campaign collaborators include the AAP, the SIDS Alliance, the ASIP, the NHLBI, and the Maternal and Child Health Bureau of the Health Resources and Services Administration (HRSA).

In May, the PHS convenes a meeting of maternal and child health organizations to enlist their active participation in the Back to Sleep coalition.

In June, the NICHD begins mailing campaign materials to the membership of the AAP and the American College of Obstetricians and Gynecologists, all U.S. hospitals with newborn nurseries, and regional and local clinics of the Special Supplemental Nutrition Program for Women, Infants, and Children (WIC). Public service announcements (PSAs) are sent to 6,700 radio stations and 1,000 TV stations to amplify the message that placing infants on their backs to sleep can reduce the risk of SIDS.

Based on additional research results, the AAP Task Force begins emphasizing that babies be placed to sleep wholly on their backs because the back sleep position is associated with the lowest SIDS risk. The AAP Task Force also recommends using firm sleep surfaces and avoiding the use of soft bedding in cribs. Back to Sleep updates its messages and materials to reflect these changes.

Research findings suggest that bed sharing between adults and infants, especially under certain conditions, may increase the risk of SIDS.

Tipper Gore, wife of then-Vice President Al Gore, becomes the national spokesperson for the Back to Sleep campaign. 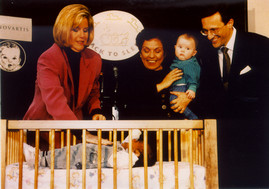 Gerber® Baby Products, in partnership with the NICHD, includes Back to Sleep messages on rice cereal boxes and mails Back to Sleepmessages to mothers.

Ms. Gore records a message that plays on the Gerber toll-free information number 7 days a week, 24 hours a day, for a year.

After research shows that African American mothers are less likely to put their babies on their backs to sleep, U.S. Surgeon General David Satcher, M.D., Ph.D., reaches out to communities of color with Back to Sleep messages through news releases and PSAs.

The Back to Sleep campaign begins outreach to more than 250,000 childcare centers and licensed childcare homes.

Johnson & Johnson includes Back to Sleep brochures in its First Aid Kit for New Parents. The Pampers Parenting Institute also becomes a partner in the Back to Sleep campaign, distributing materials to health care providers and parents and adding the Back to Sleep logo and message on newborn diapers and packages in English, Spanish, and French.

The U.S. Consumer Product Safety Commission, the NICHD, and the AAP Task Force issue a safety alert to remind caregivers that babies should sleep on a firm sleep surface, with no soft bedding in the crib, and with the blanket tucked in "feet to foot" (the baby's feet are at the bottom of the crib, the blanket is no higher than the baby's chest, and the blanket is tucked in around the crib mattress, making it unlikely the baby can slip under the blanket).

The Back to Sleep campaign produces nine video PSAs for minority communities to highlight strategies for reducing the risk of SIDS.

The NICHD—in collaboration with the National Black Child Development Institute (NBCDI), the SIDS Alliance (now First Candle), and other campaign sponsors—hosts the first meeting with members of African American organizations to identify, discuss, and plan strategies for spreading safe sleep messages within African American communities. Participants include representatives from Alpha Kappa Alpha Sorority, Inc. (AKA), the Women in the National Association for the Advancement of Colored People (WIN), the National Medical Association, the National Coalition of 100 Black Women (NCBW), Chi Eta Phi Sorority, the Chicago Department of Health, the District of Columbia Department of Health, the National Association of Black Owned Broadcasters, the Pampers Parenting Institute, and Zeta Phi Beta Sorority.

U.S. Department of Health and Human Services (HHS) Secretary Donna E. Shalala and Ms. Tipper Gore announce the start of a new component of the Back to Sleep campaign that will focus on reducing the incidence of SIDS among African Americans.

The AAP Task Force changes its recommendation regarding sleep position, to emphasize that the back position is best, the side position confers risk, and bed sharing may be hazardous under certain conditions. The Back to Sleep campaign revises its messages and materials to reflect this change.

The NICHD, in collaboration with its African American partner organizations and Back to Sleep campaign sponsors, creates Babies Sleep Safest on Their Backs: A Resource Kit for Reducing the Risk of SIDS in African American Communities.

Social marketing messages from the Back to Sleep campaign appear on 50 buses in the metropolitan Washington, DC, area during October, National SIDS Awareness Month, with support from the D.C. Department of Health.

The NICHD begins a series of national training workshops on SIDS risk reduction with its partner organizations: AKA, WIN, and the NCBW. Attendees at these workshops learn how to use the Resource Kitin their own African Americancommunities, and then train members of individual chapters and affiliates across the country during regional meetings. 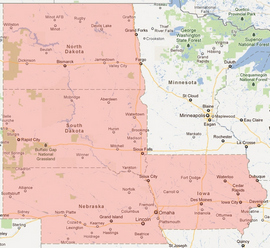 The NICHD begins working with representatives from the Indian Health Service (IHS) and from national American Indian/Alaska Native organizations to examine ways to reach out to these populations with safe sleep messages.

The Aberdeen Area Infant Mortality Study of Northern Plains Indians finds that American Indian/Alaska Native infants in the Aberdeen area were less likely to die of SIDS if their mothers received visits from public health nurses before and after giving birth.

Back to Sleep partners, led by the NICHD and with the help of the National Institute of Nursing Research, collaborate with nursing and other organizations to create a continuing education (CE) program on SIDS risk reduction specifically for nurses. Statistics show that although most nurses are aware that back sleeping reduces SIDS risk, few know that the side sleep position confers risk; more than one-third of nurses reported using the side sleep position for babies in hospital nurseries. The program aims to ensure that nurses know and practice the most current safe sleep recommendations and encourages them to share these messages with parents.

The NICHD hosts a follow-up meeting with American Indian/Alaska Native representatives and organizations in Rapid City, SD, to identify and develop community-driven strategies for increasing SIDS awareness and reducing the number of infant deaths in Native communities. 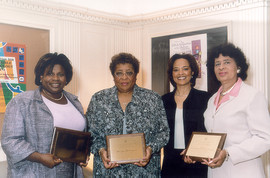 The NICHD, in collaboration with the AKA, WIN, and the NCBW, leads the Partnership for Reducing the Risk of SIDS in African American Communities initiative in conducting three regional summits in Tuskegee, AL; Los Angeles, CA; and Detroit, MI. The summits encourage SIDS risk reduction activities in African American communities, educate stakeholders to make changes in policy and behavior, and create collaborative models and resources for local communities.

The AKA, WIN, and the NCBW host the first "SIDS Sunday" in African American communities. The program includes presentations from the NICHD and other organizations and calls on faith leaders to help raise awareness about SIDS and ways to reduce the risk of SIDS among their congregations.