Research On Possible Causes Of SIDS

Most scientists believe that babies who die of SIDS are born with one or more conditions that cause unexpected responses to the internal and external stressors common during an infant's life. Many researchers argue that finding the cause or causes of SIDS lies in a deeper understanding of the development and functions of the brain and nervous system of infants, including those who succumb to SIDS.1 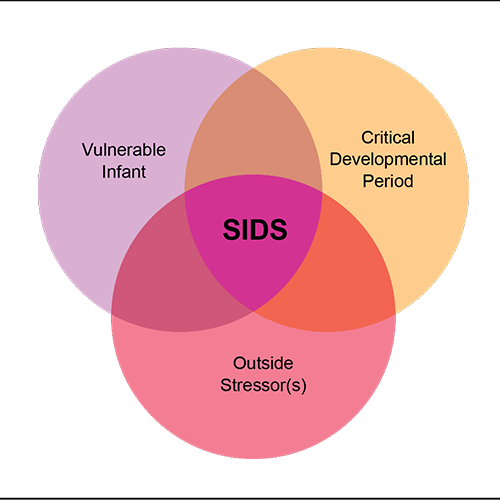 According to the Triple-Risk Model, all three elements must be present for a sudden infant death to occur:

If caregivers can remove one or more outside stressors, such as placing an infant to sleep on his or her back instead of on the stomach to sleep, they can reduce the risk of SIDS.3

Mounting evidence suggests that some babies who succumb to SIDS are born with unseen brain abnormalities. These abnormalities are typically found within a network of neurons that use serotonin as a neurotransmitter and are located in a portion of the brain stem likely to control breathing, heart rate, blood pressure, temperature, and waking from sleep.4

But scientists believe that brain abnormalities alone might not be sufficient to cause SIDS. They theorize that other events also must occur (e.g., lack of oxygen, excessive carbon dioxide intake, overheating, an infection) for an infant to succumb to SIDS (as described in the Triple-Risk Model).

For example, many babies experience a lack of oxygen and excessive carbon -dioxide levels when they have respiratory infections or when they re-breathe exhaled air that has become trapped in bedding as they sleep on their stomachs. Normally, infants sense this inadequate air intake, and their brains trigger them to wake up or trigger their heartbeats or breathing patterns to change or compensate. In a baby with an abnormality in the brain stem, however, these protective mechanisms may be less effective, so the child may succumb to SIDS.

Such a scenario might explain why babies who sleep on their stomachs are more susceptible to SIDS.

Even though it is unlikely that one defective gene predisposes a baby to SIDS, genes may act in combination with environmental risk factors to result in SIDS.5Predisposing factors could include polymorphisms in genes involved in metabolism and the immune system, as well as conditions that affect the brain stem and cause neurochemical imbalances in the brain. Polymorphisms may predispose infants to death in critical situations.

One example of a genetic polymorphism that may be associated with SIDS involves the immune system. Studies in Norway and Germany have revealed an association between partial deletions of the highly polymorphic C4 gene and mild respiratory infections in infants who have died of SIDS.6Differences in C4 expression may contribute to differences in the strength of the immune system by regulating the predisposition to infectious and autoimmune diseases that put infants at higher risk of SIDS. Partial deletions of the C4 gene are fairly common and are found in up to 20 percent of the white population. Other examples of polymorphisms and genetic mutations are more common in SIDS infants, but how they are related to SIDS is unknown.

Also, many SIDS infants have an activated immune system, which may indicate that they are vulnerable to simple infections. In one study, approximately 50 percent of infants who died of SIDS had a mild upper airway infection before death.7

Mutations can give rise to genetic disorders that can cause sudden unexpected death. If there is a family history of a metabolic disorder, genetic screening can determine if one or both of the parents are carriers of the mutation, and, if so, the baby can be tested soon after birth. If the condition is not identified, however, the resulting death may be mistaken for SIDS.

When a sudden infant death does occur, it is important to search for genetic mutations; infants with such mutations should be excluded from those diagnosed as dying of SIDS.8One example of a genetic mutation that may be misdiagnosed as SIDS is a deficiency in fatty acid metabolism. Some babies who die suddenly may be born with a metabolic disorder that prevents them from properly processing fatty acids. A buildup of fatty acid metabolites can lead to a rapid disruption in breathing and heart function—a disruption that can be fatal.

Some infants who have been diagnosed as dying from SIDS have rare mutations that affect the function of the cardiac conduction system. These mutations can lead to a deadly arrhythmia.